"Where are WEEE going?" Workshop 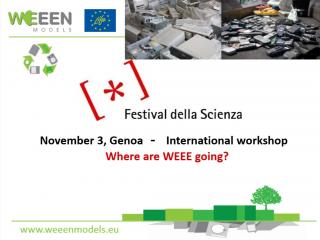 The networking workshop “Where are WEEE going? How can we reach the new WEEE collection target?” organized by Life WEEEnModels Project took place in Genoa last November 3th 2016 during the popular Italian “Festival of Science”. http://www.festivalscienza.it/site/home/programma-2016.html

The meeting represented a unique opportunity for the LIFE projects and experts to discuss about different aspects related to the WEEE recovery and the elements necessary to make sure that the new WEEE collection and recovery targets can be achieved.

Indeed, with the new WEEE collection targets set by Directive 2012/19/EU each individual Member States will be required to collect and properly dispose the 80% of the WEEE generated within its borders every year (this percentage will rise to 85% from 2018). Parties implicated in the “WEEE System” across Europe must demonstrate an effective enforcement actions and greater synergies among the different actors (national and EU authorities, producers, municipalities and specialist retailers) to reach that target.

The Photolife Project has been invited to the workshop because it represents an opportunity to declare the recycling problem associated to a new RAEE: the photovoltaic panel.

The WEEEnModels Project (LIFE 12 ENV IT 001058) aim is to increase the WEEE collection rate in the city of Genoa. The project received financial support from the European Union under the LIFE+ Environment Policy and Governance Programme. The project, launched on September 2013, will end on December 2016.

The main objective of the project is to demonstrate that it is possible to reach the WEEE targets defined by European Directive 2012/19/UE (acknowledged in Italy by Legislative Decree 49/2014) through the application of an efficient logistic system and the central coordination of WEEE collection service. Particular attention is dedicated to small equipment (classified as WEEE categories R3, R4, R5) whose collection rate is far lower than other WEEE categories.

The aims of the project are:

By optimising these procedures, it can be made economically viable the passage among the retailers, the operators of the WEEE collecting area and the consortia, which deal with the different WEEE processing and recycling.

The Weeenmodels Consortium is made up of:

Stay informed on our latest news!